Torrents are files that are shared over torrent platforms such as torrent hosting web sites and software applications.  The uniqueness of torrent platforms is that almost everything is free and this aspect has been greatly appreciated by the users worldwide. In an era where everything is up for a premium who does not want the latest PSY video in HD format for free?!

The torrent client interface enables the downloading of files at a faster rate. Over the years there have been several client interfaces that render hosting and downloading of files of varied sizes. Bittorrent, uTorrent, vuze etc. are some of the popular torrent application platforms. uTorrent is viewed as the one of the most popular torrent interface owing to its several user-friendly and regular up gradation features. Analogous to uTorrent, Christophe Dumez along with several other developers came up with qBittorrent in 2006 that best suits for browsing and downloading files from KickassTorrents. The developers used the insights from the available uTorrent applications which helped them build a more comprehensive and exhaustive torrent platform. qBittorrent has been built using the Qt4 and the lib torrent-rasterbar.

It eliminated some of the hindrances of µtorrent but kept the user interface unchanged. This made the transition easy to the user. An inbuilt search engine made the user interface more proactive. All BitTorrent files are supported by this platform. The effort that has gone into the development of this platform has been enormous and time consuming in comparison to its contemporaries. It is therefore no surprise that the software has features that are more advanced than Deluge or Vuze.

Installation of this torrent application is simply elementary and there are variations available for every platform. It has been customized for almost every operating system such as Windows, Mac OS X, Linux and Ubuntu. Installation on the Ubuntu requires mere two lines commands at the console level. According to the data gathered by Sourceforge, this has been viewed as the most preferred torrent application. Sourceforge used software download as the primary parameter and found that this was the most preferred torrent application download.

A file with a dot torrent extension is easy to run since clicking on the file automatically activates the default torrent platform. This therefore does not assist in the assessment of the software. The search engine that has been included in qBittorrent is significantly exhaustive and this aspect ranks it higher than the rest. This has enabled the users to search for the requisite files in the search tab of KickassTorrents unlike the rest. The results can further be filtered based on the number of seeds and leechers thereby eliminating the search time in the several torrent hosting web sites. It functions independent of the Java Virtual Machine while making use of Python for its search engine. The ability to make use of the Magnet Links also makes it more versatile.

The biggest plus of this software is the web modeled Graphical User Interface. Since it is based around uTorrent, the GUI is easily comprehended by all the users. Another advantage of using this client is that it is multilingual and supports up to thirty five global languages. There is a wide range of options for the advanced level user that make him fall in love with the software. 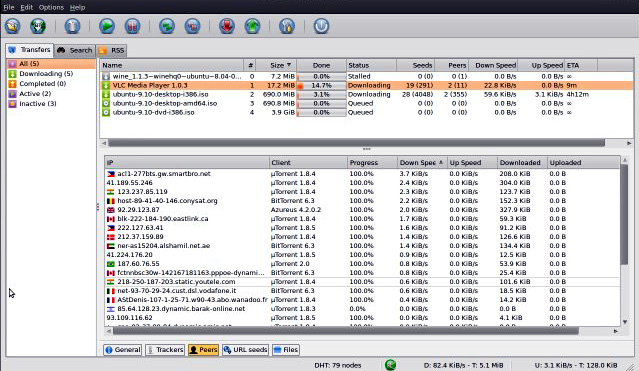