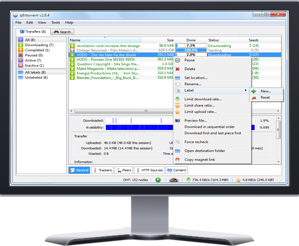 After several file sharing websites have been made unavailable by ISPs in the UK, loads of proxies emerged to make sure that individuals could still get access. ISPs reacted to demands by blocking those proxy websites also. This has lead us to a fresh service that makes torrent pages reachable and furthermore, it makes possible to use the blocked proxies. This unique service is Immunicity.

Though it has always been the US fighting against online piracy and developing copyright laws, UK has recently stood out to censor the web. Obviously, it is impossible to prevent people from trying to gain access to something that has been blocked and it will always continue to be a silly cat-mouse game. As institutions want to censor the Internet, people want it to be free and content in it available. That is just the case with big names like isoHunt, KickassTorrents, EZTV and many more to name.

Despite the fact that proxy websites are providing the chance to access torrents, they are also about to become useless when ISPs block them. So a group behind Immunicity saw this opportunity to create something that would allow using all these file sharing systems again. And they have now introduced the innovative tool that can be obtained by any individual. The team says they wanted to create something new, free and fast that could replace the expensive VPNs or the kind of slow Tor project. So what can this software to exactly? It finds a workaround to restricted http and https using its own servers and it doesn’t matter which country the user is located in. There is no need for subscription as the program is free of cost and anonymous. For example, in Mozilla Firefox the application works with ease. All one has to do is open it up from Options and insert the URL of the blocked site. Instantly it makes a path to this website through its own fast servers. The authors of this superb tool promise it will take you to blocked adult sites too, so not only for music downloaders as it seems.

There have been lots of news about censoring the Internet, blocking torrent and adult websites in UK this year. Also they have started to adapt some content censorship methods that all makes life harder for internet users. This is why programmers come up with new systems and methods to still be able to perform same actions which used to be common on the web. Immunicity is one way to do it, but there are still lots of other applications and know-hows that one could benefit from. Among these, you will find some decent software on our homepage to share legal files with your friends or relatives. Just don’t break the law but use the internet openly as it has always been and should be endlessly.